Mount Kilimanjaro is the highest peak in Africa. Located in East Africa, Mount Kilimanjaro towers over Tanzania's rift valley at 19,230 feet tall. Kilimanjaro is a stratovolcano that began forming a million years ago, as eruptions laid repeated layers of volcanic ash, lava and pumice in the area. 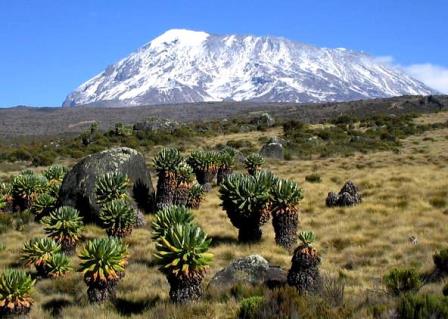 Kilimanjaro is made up of three volcanic cones: Shira, Mawenzi and Kibo. The highest point is called Uhuru, which means "freedom" in Swahili. Uhuru Point lies on Kibo, a dormant volcano whose last major eruption was 360,000 years ago. But every day, Kibo's release of sulfur and other gases into the atmostphere is a constant reminder of its potential for eruption. Shira and Mawenzi are extinct volcanoes.

One of the reasons the mountain at the roof of Africa is so special is that although located near the equator, the mountain is capped with ice. However, this may not be the case for long. The glaciers have reportedly shrunk 82% since 1910 and 33% since 1989. Scientists believe that cause of the disappearing glaciers is global warming, and that Kilimanjaro will be ice free in less than 40 years.

The precise origin of the name Kilimanjaro is disputed. However, most believe that the name means "White Mountain," and is formed from the Swahili word, Kilima, meaning "mountain," and the KiChagga word Njaro, meaning "whiteness."

Kilimanjaro was first climbed in 1889 by Hans Meyer a German geologist. Since the establishment of official trails and hut shelters on Kilimanjaro between 1912 and 1928, tourists began climbing Kilimanjaro with the assistance of guide companies. Tourism on the mountain has been on a steady increase in the last decade. Currently, over 50,000 people climb Kilimanjaro every year.

Despite its height, Kilimanjaro can be climbed by nearly anyone. It does not require the use of any special equipment or technical knowledge. Half of our customers have no experience before climbing Kilimanjaro. read more...

To climb Kilimanjaro, adequate preparation is essential for a successful summit. Physical training is important. But climbers also need to obtain the proper gear, vaccinations, a visa, travel insurance and flights. read more...