Climbing Kilimanjaro is a serious feat, but can be acheived by nearly anyone with a reasonable degree of fitness and health. Kilimanjaro is a "walk up" mountain, meaning no technical skills and no specialized climbing equipment such as harnesses, helmets and ropes, are required.

For most days, the schedules are very reasonable, with hiking distances ranging from 4-6 miles at a slow, steady pace. The slow ascent of the trek is intentional, as these days prepare the body for the lung busting summit attempt, which is a long and arduous journey. Most people finish in about 12-14 hours. 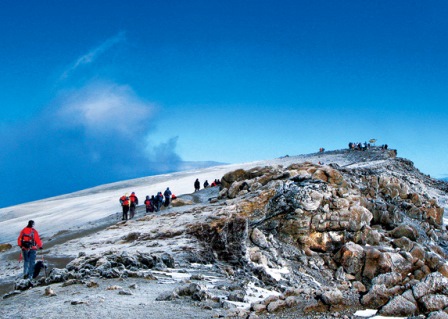 There are multiple routes on Mount Kilimanjaro, which take between five to eight days to complete. These routes begin and end in different areas of the park, and traverse different sides of the mountain. Most of the routes require camping. Pit toilets are set up at each site. It is recommended to take the longer routes with extra days for altitude acclimatization to decrease the possibility of developing acute mountain sickness (AMS), also known as altitude sickness.

Kilimanjaro climbs are fully supported treks, meaning that a mountain crew consisting of guides, cooks and porters escort climbers between huts/campsites. The guides lead the way, set the pace, determine rest breaks, monitor the well being of the climbers and most importantly, implement emergency rescues when necessary. The porters carry the gear, including tents, sleeping bags, sleeping pads, food, cooking equipment and dining tables/chairs. The climbers themselves only need to carry a day pack, with extra clothing and other items needed during the daily walks. Cooks prepare the meals for the climbers and crew.

Most meals served on Kilimanjaro consists of freshly prepared food. Some meals, mainly lunches, are packed, consisting of a sandwich, egg, bread, fruit, chocolate and other snacks. Water is obtained from streams and boiled for sterilization.

The weather on Kilimanjaro varies according to altitude more than season. At the base of the mountain, the temperatures are mild and pleasant. The higher the altitude, the colder and harsher the conditions. Temperatures at the peak can be below zero degrees (fahrenheit). A typical climber will therefore experience the gammut of temperatures from hot and humid to blistering cold and windy.

To climb Kilimanjaro, adequate preparation is essential for a successful summit. Physical training is important. But climbers also need to obtain the proper gear, vaccinations, a visa, travel insurance and flights. read more...